MBS RECAP: Quarter Ends With Volatility, But No Sell-Off

If we take a look at everything that's happened since bonds began their big sell-off yesterday afternoon, it all ended up being a wash by the end of today's trading.  A chart illustrates the point: 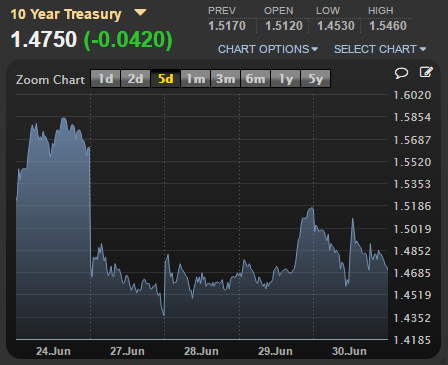 In arriving at this flatness, there have been a few notable players.  Treasuries began moving lower in yield of their own volition in the morning hours but leveled off when European bond markets began to weaken.  That didn't last long as the head of the Bank of England said that he expected the central bank would need to provide stimulus over the summer.  Sterling (British currency), and European bond yields moved swiftly lower, bringing Treasury yields right back in line with the week's lows.

When European markets closed for the day, Treasuries quickly corrected back to the highest yields of the domestic session, but managed to find support there and gradually rally back well into positive territory by the 3pm close.

MBS outperformed all day, gaining more relative to Treasuries at the best moments and losing less during the mid-day sell-off.

MBS Pricing Snapshot
Pricing shown below is delayed, please note the timestamp at the bottom. Real time pricing is available via MBS Live.
Today's Reprice Alerts and Updates
A recap of Alerts and Updates provided to MBS Live subscribers.
12:47PM  :  ALERT ISSUED: Here's That Volatility at The European Close!
11:52AM  :  Bonds Battle Back With Help From Several Sources
MBS Live Chat Highlights
A recap of featured comments from the Live Discussion on the MBS Live Dashboard.
Matthew Graham  :  "When you look at a long term chart of Japanese yields (or even a long term chart of US 10yr yields going back to 1950's) and consider it in conjunction with someone like Yellen saying the factors holding rates down could be the new normal, and talking about the new natural Fed Funds Rate being near zero, you know something is changing. 2 years ago, such comments from our Fed chief would have been unimaginable, yet now they are taken in relative stride."
jamie Fitz-Gerald  :  "guys Q1 of 2014 saw rates touch 4.875% that was 2 years ago"
Bromi Krock  :  "agreed MG"
Matthew Graham  :  "I doubt we'll see anything above 5% for very long ever, if at all."
jamie Fitz-Gerald  :  "in ten years, my money is on over"
B C  :  "UNDER"
Andy Pada, Jr.  :  "what is over/under for the next 10 years? 5%?"
Brian Bockholdt  :  "I got this MG"
Matthew Graham  :  "The downside of being right is that you're in charge now and I'm taking the rest of the day off."
Brian Bockholdt  :  "bouncing commenced"
Brian Bockholdt  :  "Okay good, now we can bounce"
Matthew Graham  :  "
MBS Live Alert Issued
Here's That Volatility at The European Close!"
Brian Bockholdt  :  "We need a re-price alert to cause a bounce"
Brian Bockholdt  :  "Yield is headed to red"
Matthew Graham  :  "Not quite time, but I'm keeping an eye on it, always. View Video"
Paul Bogosian  :  "At what point would we look at the FNMA 30 2.5 coupon?"
Brian Bockholdt  :  "sudden jump in yield"
Download our mobile app to get alerts for MBS Commentary and streaming MBS and Treasury prices.